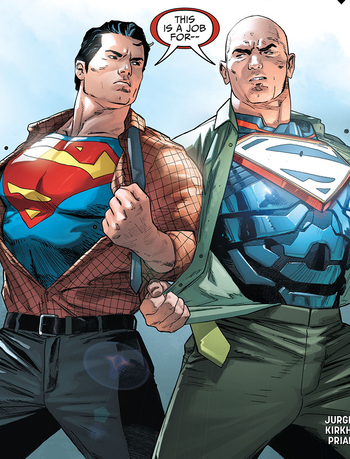 Not only are they rivals, but most of the time they're arch-enemies.
Revered by many — I, too, revere him
Feared by many — I, too, fear him
Now, that person stands at my side
Now my friends are with me
Some of them were once heroes
Some, my mortal enemies
And as we face each other in battle, locked in combat
We shine ever brighter
— Theme song,note translated from Latin Super Smash Bros. Brawl
Advertisement:

The Rival joins forces with The Hero against a mutual foe. Can be temporary (due to The Only One Allowed to Defeat You sentiment) or permanent (a Heel–Face Turn if The Rival previously served the evil side, especially when Defeat Means Friendship or Fire Forged Friendship ensues).

The opposite of Rival Turned Evil. Bear in mind, however, that The Rival may not always be evil. He or she may simply be an antagonist trying to one-up The Hero in doing good things, or the rivalry may be based on other unrelated reasons, such as personal ones. A subtrope of Enemy Mine, which is any case in which a protagonist and antagonist team up against a common enemy (not just rivals).