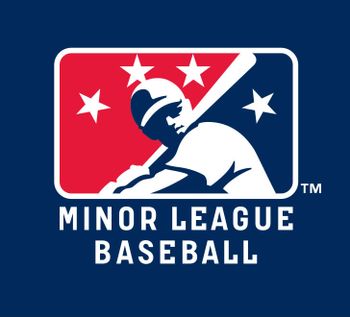 Minor League Baseball, also called MiLB or "the farm system", is where most players drafted by MLB Teams play before making it to the major leagues, if they ever make it at all. Teams are affiliated with major league clubs and serve to develop players by having them progress through increasing levels of competition quality and larger markets.

Teams belong to a multi-tiered system of leagues ranging from the Rookie league all the way up to AAA. The complete list, working from the bottom, goes like this:

Because the players are not well known, Minor League teams are often marketed through use of crazy promotions and give-aways, and a sense of local pride. The manic atmosphere is added to by the frequently-amusing or whimsical names of the teams, like the former Las Vegas 51s (named for Area 51 and with a grey alien mascot; since renamed the Las Vegas Aviators) and Albuquerque Isotopes (which is a Simpsons reference, despite the club's insistence it's just about Albuquerque's links to the Los Alamos National Laboratory) of the Pacific Coast League, and the Lehigh Valley IronPigs and famous Toledo Mud Hens (often mentioned on M*A*S*H as the hometown team of Wholesome Crossdresser Cpl. Klinger) of the International League. Lately, some teams have come around to the realization that in comparison with the bigs, the smaller, more intimate facilities and comfortable vibe and wallet-friendly prices are a powerful draw themselves (think jazz bar versus large arena). This view is—deliberately—reinforced on the part of teams that are within easy driving distance of the parent MLB club. The Oriolesnote Norfolk, VA; Bowie, MD; Frederick, MD, Salisbury, MD and Aberdeen, MD, Red Soxnote Pawtucket, RI; Portland, ME & Lowell, MA, Indiansnote Columbus, Akron & Willowick, OH, Yankeesnote Scranton, PA; Trenton, NJ & Staten Island, and Philliesnote Allentown, PA; Reading, PA; Lakewood, NJ & Williamsport, PA systems are particularly fond of this: they each have their AAA, AA, and at least one A farm team in fairly close proximity to the parent club.

Players from the majors will occasionally play for minor-league affiliates of their teams while they recover from injuries. The roster rules forbid a major league team from reactivating an injured player within ten days of his last game played if the team calls up a player from the minors to replace him (known as putting him on the "injured list" or "IL"note before 2017, known as the "disabled list"), but there is no prohibition on that player from playing in the minors during that exclusion period (known as a rehab assignment).

Affiliated minors should not be confused with independent minor leagues such as the Atlantic League or Frontier League. Although these leagues do often have players who were drafted into MiLB, they don't have a direct affiliation with Major League Baseball clubs, and are often populated with players trying to impress enough to be signed by affiliated minor league teams again.

Also not to be confused with amateur collegiate summer leagues, such as the Cape Cod League, which are amateur leagues consisting of college players playing during their summer break while still maintaining their NCAA eligibility for the following school year.

An example of MiLB teams in movies is the movie, Bull Durham, where the Durham Bulls, Kinston Indians, and other teams were all part of MiLB.

An example of an collegiate league in movies can be found in Summer Catch, where the featured baseball team belongs to the Cape Cod League.