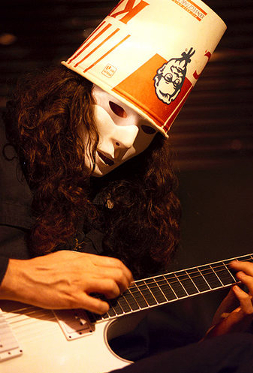 HE'S GOT A BUCKET ON HIS HEAD!
"Who's this guitar-playing sonzabitch?"
Is a question common asked
On his head, a bucket of chicken bones,
On his face, a plastic mask
He's the bastard son of a preacher man
On the town he left a stain
They made him live in a chicken house
To try and hide the shame
He was born in a coop, raised in a cage
Children fear him, critics rage
He's half-alive, he's half-dead
Folks just call him Buckethead!
—Les Claypool, "The Ballad of Buckethead"
Advertisement:
Buckethead is probably twice as good a guitar player as me and Slash combined, and can stand having fried chicken rubbed up against his face all night for a couple of hours.
—Dave Mustaine

Brian Patrick Carroll (born May 13, 1969), better known by his stage name (or rather stage persona) Buckethead, is a prolific American experimental/avant-garde/progressive/thrash/jazz/electronica/insanity songwriter and multi-instrumentalist noted for his eccentric persona, as well as for being really good with his instruments. Also, he only ever performs while wearing an expressionless plain white mask and a KFC bucket on his head. To date, he has released over 260 solo albums and performed on over 50 more. Played lead guitar for Guns N' Roses from 2000-2004, and for Praxis

He's also a painter, though as you might expect, his artworks are somewhat... peculiar.

Sadly, you probably only know him for "Jordan", the song from the scene where Goro beats the crap out of Art Lean, or the seriously badass rendition of the theme from Mighty Morphin' Power Rangers: The Movie.