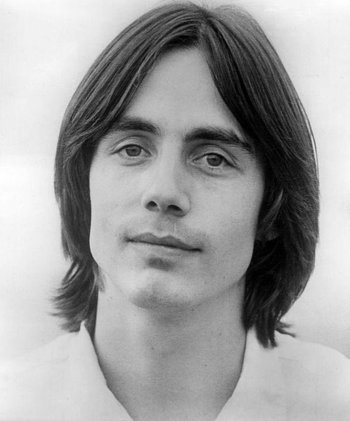 "Doctor, my eyes
Cannot see the sky
Is this the prize
For having learned how not to cry."
—"Doctor, My Eyes"
Advertisement:

Jackson Browne (born October 9, 1948) is an American singer-songwriter in the pop genre. He broke into the Los Angeles music scene shortly after his high school graduation in 1966. After gaining a strong reputation as a songwriter he released his debut album as a performer in 1972. He's still active today.

His first hit single — at least the first one the Classic Rock stations are likely to play — is "Doctor My Eyes." "Take It Easy" was written and recorded by him with the help of The Eagles' Glen Frey, and recorded by them with his permission, but his version was Covered Up by theirs'.

In 1982 he contributed the song "Somebody's Baby" to the soundtrack of Fast Times at Ridgemont High, and it quickly became his highest-charting single ever, peaking at #7 on the Billboard Hot 100 singles chart and staying on said chart for 19 weeks. Following this was the 1983 classic album Lawyers in Love, containing the title song. Lives in the Balance followed three years later with the track "In the Shape of a Heart."

His career suffered in the late 1980s and early 1990s, partly because the musical climate was changing, as well as allegations of domestic abuse towards his then-girlfriend, actress Daryl Hannah. The allegations were never proven, but they still hurt his rep. He still has a fanbase out there, though.