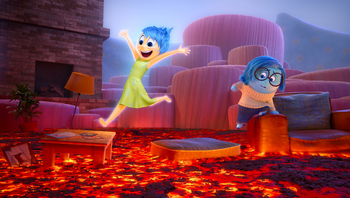 "Let's play 'The Floor is Lava'!"
"But... the floor really is lava..."
"Then you better not lose!"
"Enough with the doom and gloom, let's dance!"
— Tippy Toe, Squirrel Girl
Advertisement:

The character who's always fun and games, no matter what tone the story takes.

They're not necessarily the same as a comic relief since comedy is not really their point, but rather positivity as a whole. They do have a similar role though, acting as a mood-maker who shields others from feelings of despair or doom and generally prevents the plot from getting overly grim. Of course, if the story does start progressing towards an inevitable darker tone, then it might be necessary for them to take the backseat, leave or even die altogether.

Another aspect which often sets them apart from the comic relief is that they're unlikely to be a weak or cowardly side-character, and in fact may be a confident, leading figure that ties all other heroes together (or simply drags them along against their will). Thanks to this "bravery", rarely will they take things seriously, preferring to see the bright side of the dangerous situations they get themselves into. If they do get sad or angry, it definitely won't last long, although powerful enough moments of Break the Cutie may lead them to become a Sad Clown or The Pollyanna instead, which might take some more time to heal (or possibly never).

Those characters, just like the comic relief, have a tendency to become divisive, mostly depending on the sort of tone the work primarily focuses on. Beware, however, of trying to make them Darker and Edgier; it never works and only serves to make fans and haters alike angry.

See the Big Fun, Genki Girl and Life of the Party for specific examples of this. Contrast with Knight of Cerebus, the character who immediately brings a gloomier tone to an otherwise lighthearted work.