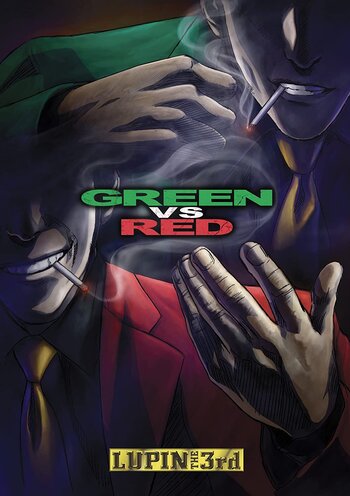 Lupin III: Green Vs. Red is an OVA made in 2008 to celebrate the 40th anniversary of the Long Running Lupin III franchise. This adaptation is a lot more self-referential than all the others that came before, because it not only provides a huge amount of homages, references and nods to almost every previous incarnation of the gentleman thief (including the original manga), but also uses them to reflect on what Lupin has become during the years and if he's still relevant in this day and age. Possibly.

The story starts with the mysterious disappearance of the real Arséne Lupin III, and with many people all around the world claiming to be him, by dressing as him and committing various grand-scale thefts and crimes. One of the impostors, however, is arrested in Tokyo for shoplifting: since he has tarnished the image of Lupin as a master thief, all of the Lupin imitators go to the rescue. Some of the copycats, however, are better. Among them are some that might be considered the "real" Lupin.

Will the Green-Jacket Yasuo replace the Red-Jacket imitator? Is the Red-Jacket an imitator or the original? Will Zenigata finally capture Lupin? Where did that Giant Mecha come from?