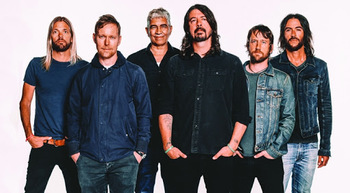 Foo Fighters is an alternative rock band, which was formed by Nirvana drummer Dave Grohl after Kurt Cobain's suicide in 1994. From 2017 to 2022, the band comprised Grohl on vocals and rhythm guitar; Chris Shiflett on lead guitar and backing vocals; Pat Smear on second lead guitar; Nate Mendel on bass; Rami Jaffee on keyboards; and Taylor Hawkins on drums and backing vocals.

The band's name is a reference to a term for unidentified flying objects sighted by pilots during World War IInote  which in turn harkens back to "foo lights", a New England term referring to the glowing lights produced by swamp gas, and produced the metasyntactic variables foo and foobar. Grohl is on record as saying he hates the name, and would never have used it if he'd thought the band would get anywhere.

while still in the band), and he plays all the instruments on every song on the band's debut album (with the exception of "X-Static", which featured Greg Dulli of The Afghan Whigs on guitar). At first, Grohl hid behind the Foo Fighters name, preferring that people judge the album on its own merits rather than on Grohl's name or the fans' desire to fill the vacuum left by Nirvana. Eddie Vedder played a few songs on his radio show, and the positive response motivated Grohl to move forward.

Grohl decided to draft in a full band for live shows and for the second album, The Colour and the Shape. Bassist Nate Mendel and drummer William Goldsmith came from cultly admired emo trope codifiers Sunny Day Real Estate, while Pat Smear, a member of The Germs and the fourth member of Nirvana for its last few years, played guitar. Goldsmith left after the album was recorded, as Grohl had replaced most of Goldsmith's drums tracks with his own. Smear left shortly after the album was released. Replacements were found in Alanis Morissette ex-bandmember Taylor Hawkins on drums and Franz Stahl in place of Smear (who was himself replaced by Chris Shiflett after the release of their third album, There Is Nothing Left to Lose; that album was recorded by Grohl, Mendel and Hawkins as a trio specifically because of the lineup instability).

The band has been praised highly by critics, stepping out of the shadow of Nirvana to become one of the most influential alternative rock bands of recent years. To date, all but 2 of their albums were nominated for the Grammy Award for Best Rock Album, with four of them actually winning. However, some critics believe that their mainstream popularity and many radio hits mean that Dave Grohl has been "selling out" Kurt Cobain's legacy. (Grohl himself wondered this in "Hey, Johnny Park!", where he sang "Am I selling you out?")

Wasting Light, their seventh studio album, was released in April 2011. It was produced by Butch Vig of Nevermind fame, and features Pat Smear back as a full member of the band. Recently, the band has gotten out of hiatus and recorded their eighth studio album, titled Sonic Highways. It was released on November 10th, 2014. It shares its title with a documentary series directed by Dave, which debuted on the previous month. This was followed with Concrete and Gold, released on September 15th, 2017, and by Medicine at Midnight, released on February 5th, 2021note the COVID-19 pandemic only delayed the release; recording had actually finished before the worldwide outbreak. They were also inducted into the Rock & Roll Hall of Fame in 2021, making Dave Grohl part of the select club of musicians inducted more than once (having already been inducted in 2014 as part of Nirvana).

On March 25, 2022, Hawkins was found dead in his hotel room only hours before the band was set to headline a music festival in Bogota, Colombia. He was 50 years old; his cause of death is not yet determined. In light of the news, the festival stage was instead turned into a candlelight vigil for Hawkins, and the band has canceled all remaining tour dates.

Note that they don't actually fight foos, much to Mr. T's chagrin.

Not to be confused with Foo Fu.