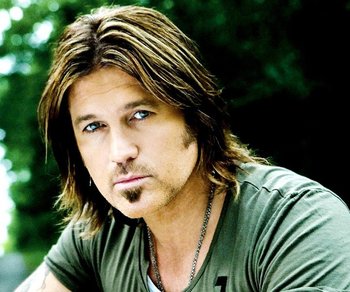 William Ray Cyrus (born August 25, 1961 in Flatwoods, Kentucky) is a Country Music performer. His career officially began in 1992 with the release of his debut album Some Gave All, which spawned four country top 40 hits in a row (including the Dance Sensation and eventual Signature Song, "Achy Breaky Heart"). His follow-up, It Won't Be The Last, debuted at #1 on the country album charts. After five albums with Mercury Records, he signed with Monument for Southern Rain, and began to pursue acting roles (including being cast as star of the Pax comedy-drama Doc. In 2003, he released two Christian country albums, although these two, as well as his other albums, were not as successful as his earliest releases.

Billy's daughter Miley Cyrus was later cast as the star of a new Disney Channel series, Hannah Montana. Billy Ray came along for the ride as well, playing Miley Stewart's In-Universe father, country singer Robby Ray Stewart (who is a self-played Captain Ersatz of Billy Ray Cyrus himself). The show's immense popularity led to a Career Resurrection; in 2006, Cyrus released the new album Wanna Be Your Joe (which featured a song performed with Miley), and then participated on Dancing with the Stars season 4 in 2007 with Karina Smirnoff as partner.

The same year, Cyrus signed with Walt Disney Records to release his 10th album, Home at Last, which peaked at #3 on Billboard's country album chart, and #20 on the Billboard 200 (notably, Miley's Hannah Montana 2: Meet Miley Cyrus reached #1 on the Billboard 200 at around the same time). A duet version of the song's debut single "Ready, Set, Don't Go" with Miley Cyrus was released as a single and reached #4 on the country chart, marking Billy Ray's first top-5 single since 1999, and Miley's first top-5 single ever. In 2009, Billy Ray Cyrus released Back to Tennessee on Disney's country label Lyric Street Records (which coincided with Hannah Montana: The Movie and featured several songs heard in it, including the duet "Butterfly Fly Away").

Also in 2009, Cyrus formed an alternative rock supergroup known as Brother Clyde, initially with Phil Vassar, Jeffrey Steele, and John Waite (but later re-formed with Samantha Maloney, Jamie Miller, Dan Knight, and Dave Henning instead. It was speculated that Cyrus may have engaged in Executive Meddling). It only released one, self-titled album and an accompanying single, and was quickly disbanded afterward. Cyrus has since formed his own label, Blue Cadillac Music, for subsequent releases.