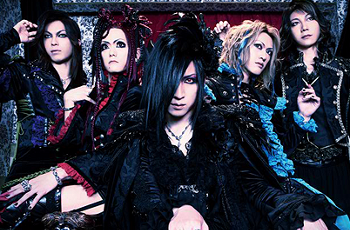 Left to right: Hide-Zou, Tsunehito, Asagi, Ruiza, Hiroki.
D is a Visual Kei melodic metalcore/gothic rock band formed in 2003 by former members of the band Syndromenote namely, Asagi, Ruiza, and Sin. They're most known for vocalist Asagi's distinctive singing style, making equal use of regular clean vocals, Harsh Vocals, and his strong falsetto (to the point where some people forget that there are four other band members).
Advertisement:

They started off as an indie band on their own record label, GOD CHILD RECORDS, before getting signed to major label avex trax in 2008—but then severed their contract in 2011 and returning to their old indie label.

The band has announced that they will go on an indefinite hiatus following their last live show at the end of December 2014, citing Asagi's health as the reason for the break. Fans have been more or less assured that this doesn't mean the band is breaking up — merely that Asagi has been struggling with jaw trouble and needs to take time to heal.

Tropes applying to D and their music