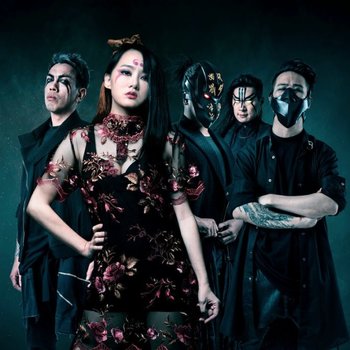 Chthonic (閃靈) are a Taiwanese Black Metal band that formed in 1995.
Advertisement:

The band originally played traditional Black Metal before they found their own sound, combining Black Metal, Melodic Death Metal, and Taiwanese folk music. The lyrics generally consist of themes from Taiwanese culture and history. The band members are also political activists advocating independence for Taiwan. Additionally, Freddy Lim is currently the Chairman of the Taiwan chapter of Amnesty International.

This Band Displays the Examples of These Tropes: