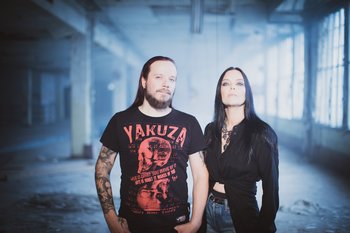 The Dark Element is a project formed by Jani Liimatainen (Insomnium, ex-Sonata Arctica, Cain's Offering) and Anette Olzon (Alyson Avenue, Nightwish) in 2016, known for its poppy, synth-backed Gothic Metal with Anette's mezzo-soprano vocals front and center. Their self-titled debut came out in 2017 to much critical acclaim and warm welcome particularly by fans of the duo's former bands. In November 2019, their sophomore effort Songs the Night Sings was released.