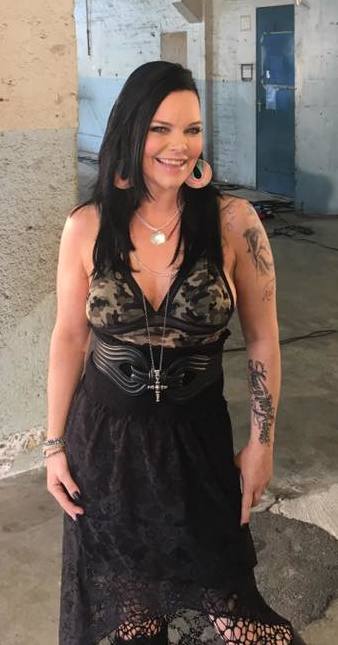 Anette Ingegerd Olsson, better known as Anette Olzon, is a singer from Katrineholm, Sweden, best known for her work with Nightwish as vocalist from 2007 to 2012. She is currently the vocalist of Alyson Avenue and The Dark Element.

Anette was born into a musical family and had to learn to play oboe for eight years. She toured with her mother's band and sang with them on certain occasions, then took to talent shows where she received laudable recognition. In 1988, she joined a cover band called Take Cover but her time was short-lived as she dabbled into more endeavors. At 21, she landed the lead role in the Rock Opera Gränsland in Helsingborg.

In 1999, Anette joined AOR band Alyson Avenue in the studio, and became their official lead singer after the band's demo allowed them to contact various labels. After seven years and two albums, she left the band and was eventually replaced by Arabella Vitanc. At the time of her departure, she was one of ten singers (out of over 2000 applicants) shortlisted to become Nightwish's next frontwoman. Despite some anxieties on Tuomas Holopainen's part due to Anette having a son, a unanimous vote by the band finally landed her the part. After efforts to hide her identity, the band finally made it official in 2007, creating a great rift in the fandom.

Five years and two particularly Darker and Edgier albums later, Anette was fired from Nightwish, replaced in turn by Floor Jansen (After Forever, ReVamp) on short notice. She then took the time to focus on her solo career as well as study nursing in case it doesn't work out. She released Shine in 2014, a Lighter and Softer work than most of her discography up to that point, and followed through with a two-song EP in early 2016.

After staying out of the spotlight for a bit longer, she made her way back to the metal scene with former Sonata Arctica axeman Jani Liimatainen, releasing The Dark Element in 2017.

Anette Olzon and her music provide examples of: