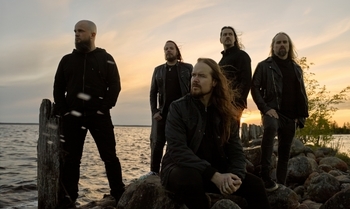 Where the last wave broke.

For the part of man
Is to take the sombre path
Mortal Share , from Above the Weeping World

Insomnium is a Finnish Melodic Death Metal band which formed in 1997. They have garnered much acclaim over the course of their active time and have become one of the more well recognized faces of modern melodeath, as well as titans of the genre in their home country. They are known for their characterized melodic death metal sound that blends doom and progressive metal to create dark, melancholic, and atmospheric songs, with themes and extremely erudite lyrics that focus on sorrow, darkness, and nature.
Advertisement:

They are also somewhat known for sharing one of their (three) guitarists with fellow Finnish melodic death metal band Omnium Gatherum, and tour with them frequently (if only for convenience sake).