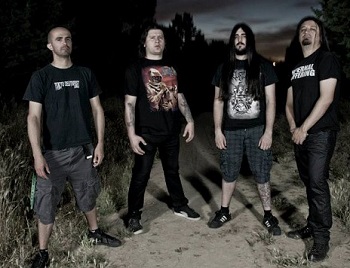 Internal Suffering are a Colombian Technical Brutal Death Metal band forming in 1994 under the name Suffer before changing in 1996.

Originally formed by Fabian, Leandro, Andres, & Jorge, All of the members but Andres had left. In 1997, Clinic Records gave them the opportunity to open up for Sodom for their South American Tour. The tour gave them rave response from fans, being cited as one of the most brutal band to emerge from South America. Supreme Knowledge Domain was recorded in 1999, and released in 2000, under the now defunct Qabalah Productions. They signed up with Displeased Records for the recordings of Chaotic Matrix and Choronzonic Force Domination

Around 2004, they moved to New York while the recording of Awakening of the Rebel, being produced by Erik Rutan underneath the Unique Leader label, while guitar duties were done by Makoto Mizoguchi of Pyrexia fame.

In 2007, the band decided to go on hiatus to settle personal problems, eventually reuniting in 2011. Cyclonic Void of Power was finally released in 2016, a whopping 10 years after the last album. They also relocated to Spain.