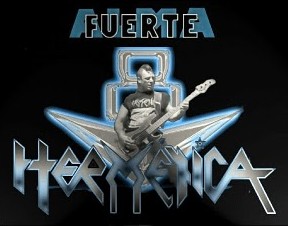 Ricardo Iorio is a musician from Argentina. He began as a bassist, then a bassist who made chorus, then a bassist singer, and finally a singer. He took part in neighbourhood bands with some friends, and then he created V8, the first Heavy Metal band in Argentina. The most famous line-up was Iorio-Civile-Rowek-Zamarbide, which recorded the first two LPs. Civile left the band, and then Rowek. Walter Giardino (who would lead Rata Blanca years later) joined V8 for a couple of months, and left. The third line-up had Cenci, Roldán, Iorio and Zamarbide, recorded the third LP. Iorio's partners became involved with religious ideas and sought to promote them with the band, which was resisted by Iorio and led to the breakup. With bassist José Amurín, the last V8 lineup continued as Logos.

Iorio made a new band, Hermética, this time full thrash metal. The singer Claudio O'Connor and guitarrist Antonio Romano stayed all the time, and the first drummer was quickly replaced by Tony Scotto. They recorded the first LP, where Iorio made some chorus here and there, and then a short LP with covers. Scotto was replaced by Claudio Strunz, making the most famous line-up of Hermética. They recorded two studio Cds and two live albums; Iorio singed some full songs now. The band broke-up shortly before the release of the second live album, and Iorio and his partners accused each other for the breakup.

And then, he made his third and most successful band, Almafuerte. He became the singer of all songs, and recorded several studio and live CDs until the band's hiatus in 2016. He has his own record label, called Dejesú Records, named after a Catchphrase from him.

For better or for worse, his three bands defined the Argentinean Thrash Metal scene (and, in some cases, other Heavy Metal scenes as well), both in musical and lyrical style, as well as their orientation.

Tropes related with him and/or his works: