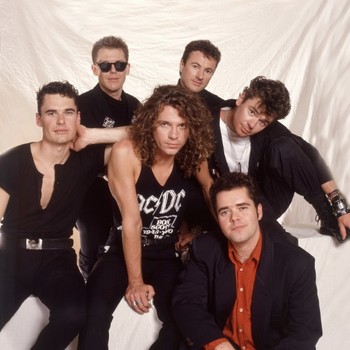 INXS (pronouned "In-X-S," a play on "in excess") were an Australian rock band that existed from 1977 to 2012. Among their best known hits are "What You Need", "Need You Tonight", "Devil Inside", and "Never Tear Us Apart." Formed in 1977, they spent many years on the Aussie pub rock circuit and supporting other bigger bands before breaking through with their 1985 album Listen Like Thieves and following up with the smash album Kick, coinciding with the golden age of MTV, where their videos became highly popular. The band rode the resulting wave of popularity for the next ten years, releasing four more well-received albums before tragedy hit the band. The charismatic lead singer and Face of the Band Michael Hutchence was found dead via suicide note Autoerotic asphyxiation is also a strongly suspected cause of death, but this is not the place to debate it. in a Sydney hotel room on November 22, 1997, dealing the band a body blow from which they never really recovered.

This, obviously, completely derailed the band for several years, and despite a two year stint with ex Noiseworks singer Jon Stevens, the band didn't do much of note until they decided to recruit a new singer (J.D. Fortune) via the Reality Television show Rock Star: INXS. This led to tours and two new albums in 2005 and 2010 before offscreen drama between Fortune and the rest of the band started to form. The band soldiered on for a couple of years with Fortune's status as a permanent member, guest vocalist or hired gun fluctuating on a regular basis before finally calling it quits in 2012.