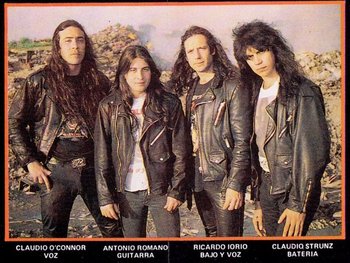 The Heavy Metal band V8 broke up in 1987. Ricardo Iorio, bassist of the band, started a new one with guitar player Antonio Romano (from Cerbero), singer Claudio O'Connor and drum player Fabian Spataro (from Mark 1). They recorded their first eponymous album, the first Thrash Metal album in Argentina. The following year the label could only offer them 27 hours of recording time for a new disc, so they made "Intérpretes", an EP with cover versions. This included even a Thrash metal version of "Cambalache", a famous Tango song.

The next full disc, "Ácido Argentino", was released in 1991. They had a new drummer, Claudio Strunz. It was one of the first Heavy Metal discs in Argentina released as a CD instead of as an LP or a cassete. They were the supporting band in concerts of Black Sabbath and Motörhead when they visited the country. They recorded a live album in Stadium, and a new album in 1994, "Víctimas del Vaciamiento". They recorded a second live album in Obras Sanitarias.

The band broke up in the first days of 1995, with Iorio and the rest of the band accusing each other for it. Iorio started a new band, Almafuerte, and the others continued as Malón, with a new bassist.