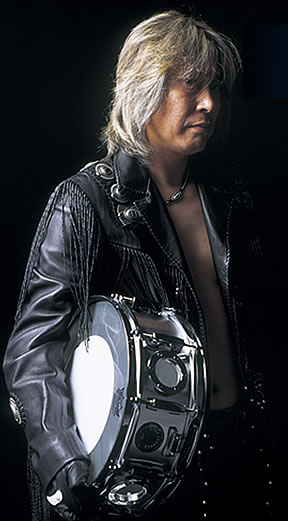 Once and for all, the best metal drummer of Japan
Advertisement:

Munetaka Higuchi or Higuchi Munetaka (December 24, 1958 – November 30, 2008) was a Japanese Heavy Metal drummer best known for founding Loudness among many, many other bands and acts with which he was associated, as both a drummer and a producer. He left Loudness in 1993 and was reunited with the band in 2001 to a successful career with it before dying of liver cancer in 2008.

He was the premier Hard Rock/Heavy Metal drummer of Japan. Nearly anyone and everyone who has ever played drums for a Japanese rock or metal band, at least to a certain date, looked up to him or credited him for inspiration. Yoshiki Hayashi, who is arguably the best living Japanese rock drummer, said on Munetaka's death that he was one of his greatest inspirations. Also, when Munetaka died, Pearl Drums posted a tribute to him