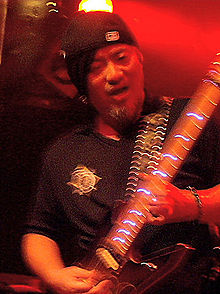 Akira Takasaki (Takasaki Akira, born February 22, 1961) is one of, if not the premier, Heavy Metal guitarists of Japan. Heavily influenced by Ritchie Blackmore of Rainbow and Eddie Van Halen, he started the band Lazy with Munetaka Higuchi, then, in 1981, also with Higuchi, went on to form Loudness and make history as one of Japan's longest-performing Heavy Metal musicians with one of the longest-enduring acts in Heavy Metal as of The New '10s (as in, since Loudness never technically "disbanded" even with Takasaki being the only member, the band has technically been in unbroken, active existence for over 30 years)