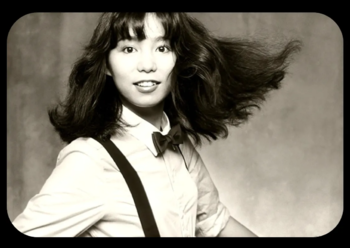 Mariya Takeuchi (竹内 まりや) (born March 20th 1955) is a Japanese Singer-Songwriter signed to Moon Records, currently owned by Warner Music Group, who is best known for being one of the defining voices of the "City Pop" movement in The '80s— think 60's Western rock-&-roll mixed with some funk or jazz, and you'll have kind of an idea of the genre she tends to work in. She is one of the best-selling female artists in Japan with a career spanning over 40 years.

She is from ultra-rural Shimane Prefecture in far-west Honshu, the third daughter of an innkeeping family. Despite such a rural lifestyle, her family loved music and she quickly took a liking to Western songs, especially The Beatles, and used that to broaden her horizons. She spent her final year of high school in Illinois under an international exchange program. Shortly after she returned to Japan and enrolled in Keio University (where she majored in English Literature), she was one of two winners of a 1974 English recitation contest sponsored by The Japan Times.*  That's Japan's longtime English-language newspaper. Also, that contest was always intended to have one boy and one girl win. The prize was a trip to Hawaii. In other words, unlike most Japanese singers past or present, she's near-fluent in English. Despite this, she has said she never felt any need to branch out worldwide even though she could have easily done so.

She made her singing debut in 1978 as a proto-Idol under RCA Japan, but quit in 1981 due to burnout from five albums in three years. During her hiatus, she married musician Tatsuro Yamashita— today widely considered one of the major pioneers of City-Pop and 80's Japanese music in general— and began writing her own songs. She returned with a bang in 1984 with the chart-topping album Variety. This album includes her song "Plastic Love", which wasn't a big hit at the time but would become a worldwide internet sensation 35 years later, receiving an official music video in 2021.

Yamashita has produced all of her albums and singles from Variety onward. Every full album from then on except one has hit #1 on the Oricon charts and all have been certified platinum.

In addition to her own work, she has served as a lyricist for other J-Pop singers, including penning a few songs for "Eternal Idol" Seiko Matsuda, as well as Akina Nakamori and many others. On a sadder note, Takeuchi wrote nearly a dozen songs for Idol Singer Yukiko Okada prior to her untimely death (for more on her, see her page). She has self-covered some of her songs originally meant for others.

Beginning in 2014, Takeuchi veered away from studio albums and focused more on singles. In 2020, she rerecorded an earlier single "Song of Life". While the original did okay, the redo— which coincidentally is her 50th single— shot to #1, making Takeuchi at 65 the oldest Japanese woman to earn a #1 single. It's also her first #1 single since "Camouflage" in 1986.