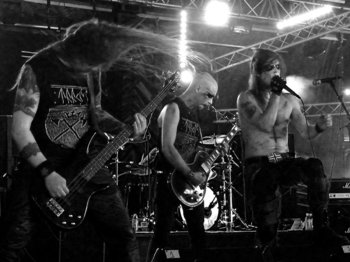 Taake is a Black Metal band from Bergen, Norway. It was formed in 1993 by Ørjan Stedjeberg (pseudonim Hoest) under the name Thule, changing it into it's current name two years later. Musically, they follow the footsteps of their national contemporaries, but with some melodic influences and a slight grooving Hard Rock edge to their riffs, sometimes landing them the label "Black'n'Roll".