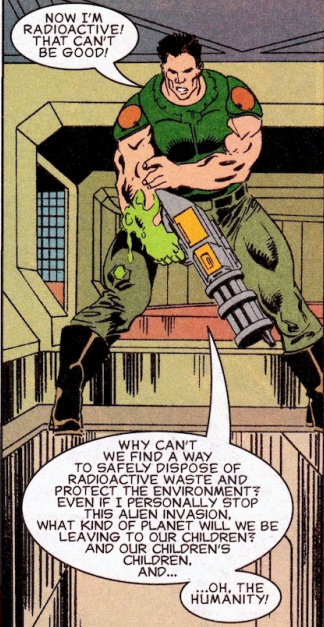 Ah, yes. Because a long lament about improper radioactive waste disposal is exactly what you expect from a comic about fighting the legions of hell in space.
"Eventually, the question you ask stops being 'Who is John Galt?' and becomes 'When will John Galt shut up?'"
— Unknown origin, regarding Atlas Shrugged (referring to Galt's 56-page long speech

An Author Filibuster is the unwholesome offspring of Writer on Board and Info Dump, where the plot stops dead in its tracks to give the author an opportunity to preach their message to the readers or audience, often very political or ethical in nature.

It's worth noting that the creation of a story, especially those of works of fiction, may entice readers into receiving the message in an interesting manner but in fact, it neither adds nor subtracts evidence from a point of view. It may display evidence, it may make an argument using that evidence, it may convince the reader using that evidence. Authors should remember this, though: a work of fiction doesn't prove anything. The fact that the author expects to take their fictional world as instantly applicable to real life is part of what makes this trope so grating, but whether or not any specific reader considers an Author Filibuster a good or bad thing is usually dependent on whether or not the reader agrees with the content of the filibuster.

If the author's opinion is the purpose of the work, it's an Author Tract. If this is the climax of the book, it's often a case of Talking the Monster to Death. If a character is delivering the rant, it's also a Character Filibuster. A main cause of Don't Shoot the Message.