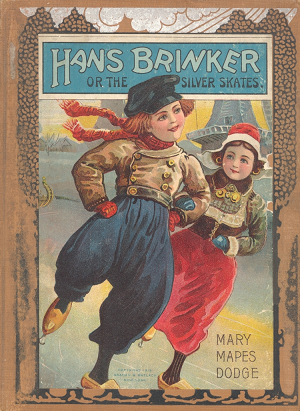 Hans is a 15-year-old boy who, together with his younger sister Gretel, yearns to participate in a great ice-skating race on the canal. The main prize is a pair of silver skates. Unfortunately, they come from a very poor family with a father who is unable to work since a fall from a dike. The father has mental problems as a result and the children have to work to support the family. They skate all right, but on homemade wooden skates that stick after a few strokes. After Dr. Boekman is persuaded to examine their father, the doctor concludes that Father Brinker could be cured by a risky and expensive operation involving trephining. Despite saving money to buy himself some steel skates, Hans offers the doctor everything he has. This touches Dr. Boekman so much that he offers to provide the surgery for free, thus enabling Hans to buy good skates and participate in the race. The operation is a success and from now on, Dr. Boekman is a much kinder man who helps Hans into becoming a successful doctor.

There is a subplot that often gets forgotten in the retelling of the story. A group of Dutch boys - Peter van Holp, Carl Schummel, Lambert van Mounen, Ludwig van Holp, Jacob Poot and Ben Dobbs - go on a multi-day skating journey to several of Holland's more famous towns. Much of the subplot consists of long conversations between Lambert and Ben on the history of Holland and the places they journey through.

In the end, Gretel wins the Girls' Race. When Peter's skate strap breaks before the third heat of the Boys' Race, Hans gives Peter his own skate strap allowing Peter to win.

There are a lot of common misconceptions surrounding this novel: