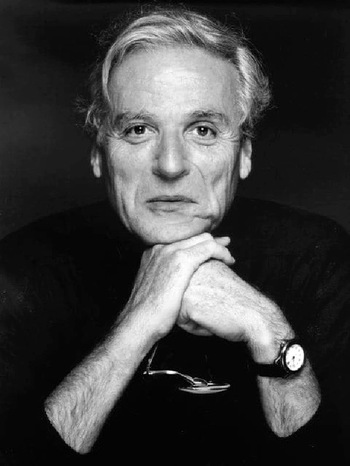 "Writing is finally about one thing: going into a room alone and doing it. Putting words on paper that have never been there in quite that way before. And although you are physically by yourself, the haunting Demon never leaves you, that Demon being the knowledge of your own terrible limitations, your hopeless inadequacy, the impossibility of ever getting it right. No matter how diamond-bright your ideas are dancing in your brain, on paper they are earthbound."
Advertisement:

His novels include The Princess Bride, Marathon Man, and Magic, all three of which were subsequently made into films with screenplays by Goldman himself. His other screenplays include a number of adaptations of novels by other authors, as well as based-on-true stories including Butch Cassidy and the Sundance Kid, A Bridge Too Far, and All the President's Men.

Goldman also wrote a number of books on the writing process and the Hollywood business, from the POV of an author, complete with useful advice; these include Adventures in the Screen Trade and Which Lie Did I Tell?: More Adventures in the Screen Trade. Additionally, in 1968 he wrote The Season: A Candid Look at Broadway, which not only reviewed every show on Broadway of that year, but the patterns that theater was taking, the impact of the Great White Way on New York City itself, and many other such topics. He managed to offhandedly predict what Broadway would turn into in a few years.

Famous also for coining the phrase "Nobody knows anything". His Signature Style includes Self-Deprecation (as a writer, as a Jewish man, as a member of the Hollywood movie machine), humorous asides to the readers, and long and convoluted sentences thanks to stream-of-consciousness writing.

Hollywood gossip attributed the screenplay of Good Will Hunting to an uncredited Goldman, but Goldman insisted in 2003 that it really was Affleck and Damon's script, with Goldman's sole contribution being to advise them to drop an FBI government-spy subplot.

Brother of playwright James Goldman, author of The Lion in Winter.

BFF of Stephen King. Not to be confused with William Golding. Or French singer Jean-Jacques Goldman.

Works by William Goldman with their own pages include:

Other works by William Goldman contain examples of: