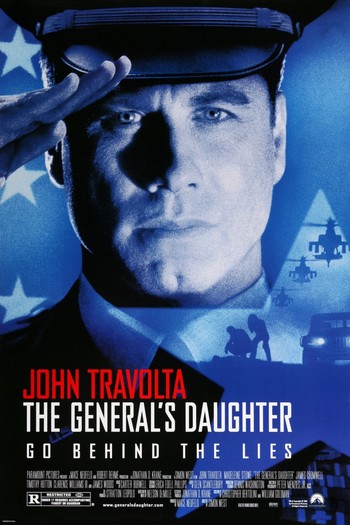 Sunhill: Why was she murdered?
Brenner: Well, possible motives for murder are profit, revenge, jealousy, to conceal a crime, to avoid humiliation and disgrace, or plain old homicidal mania. Right there in the manual.note He's wrong.
Advertisement:

The General's Daughter is a 1999 mystery thriller film, directed by Simon West. It was loosely based on a 1992 novel of the same name by Nelson De Mille.

The titular character is Captain Elizabeth Campbell (Leslie Stefanson), a specialist in psychological operations. She is the daughter of Lieutenant General Joseph Campbell (James Cromwell), an ambitious man with political aspirations. Father and daughter serve in a Georgia Army Base. Early in the film, Campbell's nude body is found staked down with tent poles, strangled, and presumably raped. Warrant officers Paul Brenner (John Travolta) and Sara Sunhill (Madeleine Stowe) are called in to investigate.

Elisabeth used to be a honor student at West Point and considered a prodigy. Then in her sophomore year, her grades slipped. She had barely graduated and seemed to be a much different person after graduation. The big reveal of the film was the reason for it.

The film was a moderate box office hit but a critical failure. Its political views are rather ambiguous, as the plot was less about politics and more about duty and integrity, and what happens when they are not upheld.

This film depends on several significant plot twists, so beware of spoilers.

This page is about the film. For the trope, see The General's Daughter.