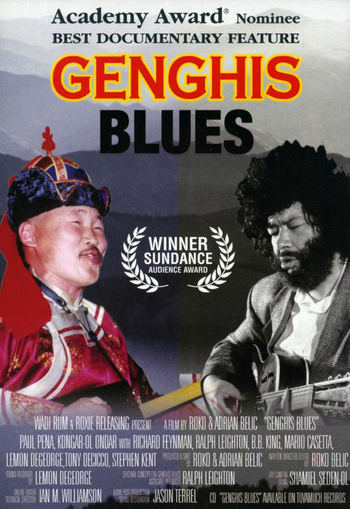 Genghis Blues is a 1999 Documentary directed by Roko Belic.

The film's central figure is Singer-Songwriter Paul Pena. Best known for writing the Steve Miller Band hit "Jet Airliner", Pena was a Blind Musician with eclectic influences. Despondent after the death of his wife, Pena became interested in listening to language lesson programs on shortwave radio. In 1984 he was tuning around for a Korean lesson, but instead picked up a Radio Moscow broadcast of unusual singing and became intrigued. He learned that it was the throat-singing tradition of Tuva, a small republic that's officially part of Siberia, wedged between it and Mongolia, and set about teaching himself both the singing style and the Tuvan language. His vocalizing impressed Tuvan singing master Kongar-ol Ondar, who went on tour in America in The '90s, and Kongar-ol invited Pena to Tuva to take part in a 1995 throat-singing symposium and competition. The documentary follows Pena and several associates as they travel from Pena's home in San Francisco to the remote outpost and learn about the culture of the land as it tries to recover its heritage and identity after the fall of the Soviet Union.

A low-key film shot on video, it became a Sleeper Hit among documentary fans, winning an audience award at the Sundance Film Festival and getting nominated for the Academy Award for Best Documentary Feature. It also brought new attention to Pena and his music. Sadly, both Pena (in 2005 at age 55 from pancreatitis and diabetes) and Kongar-ol Ondar (in 2013 at age 51 from a brain hemorrhage) ended up suffering untimely deaths.