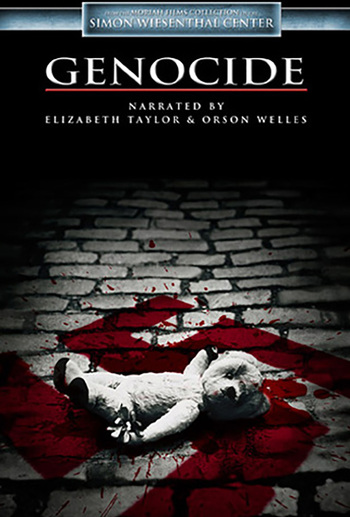 "Small wonder then, that the 9.5 million Jews who still lived in Europe at the end of the First World War looked forward with great hope to the new world, the world of Democratic Europe, the world President Wilson promised would be made safe for democracy."
—Narration
Advertisement:

Genocide is a 1981 film directed by Arnold Schwartzman.

It is a documentary about The Holocaust. Taking a straightforward narrative approach, the film starts by telling of the art, culture, and history of the Jewish community in Europe. Anti-Semitism in Europe is mentioned, grounding the Holocaust in prejudice against Jews dating back centuries. Then the film turns to the rise of the Nazis and Adolf Hitler's violent persecution of German Jewry. After the outbreak of World War II and the Nazi conquest of Europe, Hitler's program turns from the oppression of the Jews to their physical extermination by organized mass murder.