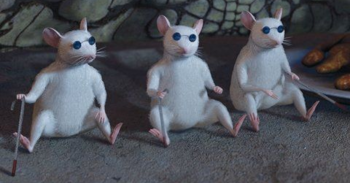 If you see a blind person in fiction, chances are they'll be sporting a pair of sunglasses.

This is Truth in Television. There are a few legitimate reasons a blind person may wear sunglasses:

This Truth in Televison is very helpful to creating fiction, as an animator doesn't have to draw eyes that aren't looking at anything, and sighted live-action actors playing blind characters can still see while playing the role without it being obvious that their eyes are moving around and focusing on things.

The Blind Black Guy is prone to wearing sunglasses. Should a character pretend to be blind, expect them to wear sunglasses as part of the disguise. Might justify Sunglasses at Night. Has nothing to do with Blind Without 'Em.