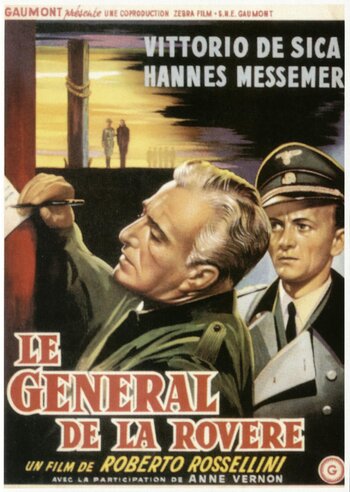 The film is set in Genoa in 1944 in the dying days of Fascist Italy—the Germans have occupied the country and installed Benito Mussolini as a puppet, while the Allies hold the southern part of the country. Vittorio De Sica (more famous as a director of films like Bicycle Thieves) plays Emanuele Bardone, a petty criminal who masquerades as "Colonel Grimaldi" and affects the manner of an aristocrat. He is in cahoots with a German sergeant, running a scheme in which Bardone collects bribe money from locals whose loved ones are in the hands of the Germans, then splits the money with the sergeant. Sometimes, they actually get a person out.

Eventually he gets busted. Bardone makes the mistake of coming to a particular woman and telling her that he's prevented her husband's deportation, only for the woman to tell him her husband was shot. Bardone is arrested for bribery.

Meanwhile, an anti-fascist Italian officer, one General della Rovere, tries to infiltrate enemy lines only to be almost immediately caught and shot by the Germans manning a roadblock. SS Col. Müller, head of the German garrison in Genoa, hits on an idea. He will have Emanuele Bardone impersonate the general! Bardone will be put in a jail for political prisoners, and, while posing as the general, will glean intelligence which he will share with Col. Müller.

But will Bardone play along?