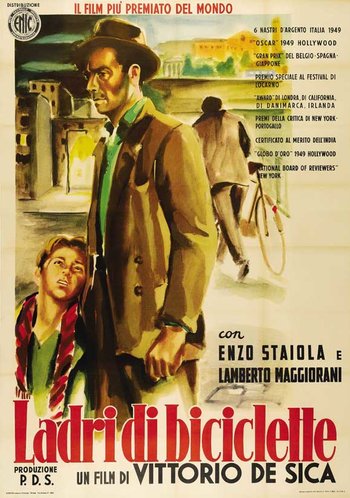 "You live and you suffer."
"No bicycle, no job."
— Antonio's employer
Advertisement:

Ladri di biciclette (translating in English as Bicycle Thieves, though it is more commonly known in that language as The Bicycle Thief) is a 1948 Italian drama film directed by Vittorio De Sica. The film is regarded as one of the greatest films ever to come out of Italy, and one of the greatest overall of all time; regularly appearing on various critics' and magazines' lists of the top 10 best ever made and winning the 1950 Academy Honorary Award for Best Foreign Language Film.

In the stagnating slums of post-World War II Rome, Antonio Ricci (Lamberto Maggiorani) is a down-and-out man desperate for a job to support his wife and two children. He finally lands a job putting up posters; but it bears with it the condition that he must own a bicycle. Without one, he's fired. In order to redeem his bike from the pawnbroker, Antonio's wife is forced to pawn their bedsheets (which were a wedding present). But it is worth the loss, for he gets the bike back and it thereby seems they have been delivered from poverty. However; later that day, while Antonio is at work putting up some posters, a young man hops on the bike and rides off with it. Antonio gives chase for a moment but loses the thief. Frantically, he goes to the police, but not realizing the ramifications that having a bike has for Antonio and his family, they refuse to take the theft seriously. When Antonio returns to the scene, all the witnesses to the theft have departed. Thus he and his son Bruno (Enzo Staiola) are forced to haplessly wander the streets of Rome searching for the bike themselves...

The plot of Pee-wee's Big Adventure was loosely inspired by that of this film.