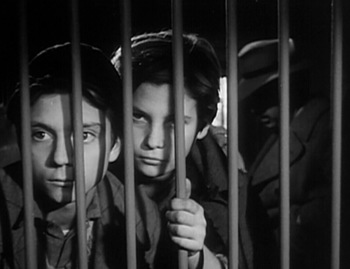 "We are the people who, in pursuit of our passions, abandon our children to fend for themselves. And our children are alone. All alone."
Advertisement:

Shoeshine is a 1946 film from Italy directed by Vittorio De Sica.

It depicts the grim existence of the poor underclass in Rome in 1944, immediately following liberation by the Americans in World War II. Pasquale and Giuseppe are two poor young urchins. Pasquale is homeless, sleeping in an elevator, and Giuseppe's family is minimally involved. The two boys scrape out a living shining the shoes of American servicemen. They dream of owning a horse, and have picked out a horse at a nearby stable to ride, but the dream seems unattainable.

Unattainable, that is, until Giuseppe's older brother Attilio enlists them in a scheme to sell stolen American blankets on the black market. What the boys don't know is that the real scheme is for Attilio and his partner to impersonate policemen and rob the woman who receives the blankets. Pasquale and Giuseppe take the money they receive for dropping off the blankets and buy their horse. Their joy is cut brutally short, however, when they're arrested for burglary. The boys are then absorbed into the maw of the Italian juridical system, with tragic consequences.

Shoeshine is generally regarded as the beginning of the Italian Neorealism movement that became so important in the years after World War II. It earned a special honorary Oscar from AMPAS for achievement in a film not made in the English language, an award that is retroactively considered the first Academy Award for Best Foreign Language Film.