Film / The Walls of Malapaga 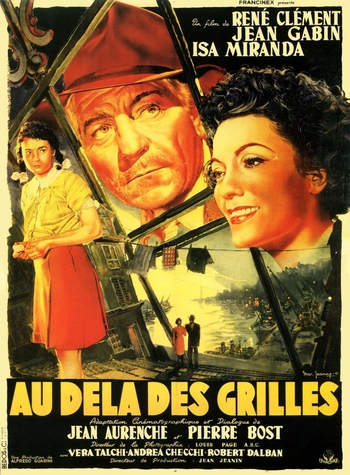 The Walls of Malapaga (Au-delà des grilles, French for "Beyond the Grating Doors") is a 1949 co-production between France and Italy, directed by Rene Clement.

Pierre (Jean Gabin) is a Frenchman who is on the run after he murdered his girlfriend. He has escaped from France by paying a ship's captain to hide him in the anchor well of his ship, but as the ship enters Genoa, he is suffering terribly from a toothache. He is compelled to leave the ship and go into the city to find a dentist, even though the captain warns him that it will be difficult to return, since the gate to the docks is guarded.

Pierre wanders around the city trying to find someone who speaks French and can take him to a dentist. Finally he runs into Cecchina, a girl of about 12 years of age who speaks French because she and her mother only recently arrived from Nice. Cecchina leads him to a dentist, who pulls his tooth. Having taken care of his tooth, Pierre goes to the cafe for dinner, where he meets Marta (Isa Miranda), a friendly waitress—and Cecchina's mother. Romance blooms between the lonely waitress and the fugitive, but the police are on Pierre's trail.