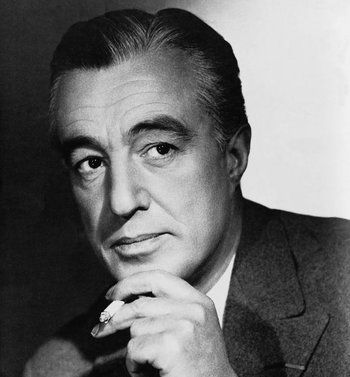 Vittorio De Sica (7 July 1901 – 13 November 1974) was one of the most famous Italian film directors of his era, and one of the greatest and most popular actors in the Italian film industry.

De Sica was born in the town of Sora in central Italy, and he grew up poor. As a young man he started working in the theater, mostly doing light comedy. He made his first film appearance at the age of 16, but his acting career proper started ten years later, at the tail end of the silent film era. After spending thirteen years as a very busy actor in Italian cinema, he directed his first film, Red Roses, in 1940. De Sica kept working as an actor, director, and screenwriter throughout World War II. For his 1945 film The Gates of Heaven, De Sica cast as many Jews or otherwise endangered persons he could find, in order to protect them against the occupying Germans, then delayed production until the Allies entered Rome.

De Sica became famous world-wide for his 1945 film Shoeshine. This drama about two shoeshine boys who dream of owning a horse won a special honorary Academy Award, which was later retroactively considered the first Academy Award for Best Foreign Language Film. Three years later he had an even bigger success with Bicycle Thieves (aka The Bicycle Thief), about a father who desperately searches for the stolen bicycle he needs for his job. It also won an honorary Academy Award. This became one of the most famous and influential films of its day, seen as the Trope Codifier for Italian neorealism, featuring non-actors in leading roles, shooting on location, and telling a Slice of Life story with very little of Hollywood or melodramatic conventions. Ironically, it was an inspiration for independent film-makers even if it was actually the most expensive Italian film made at that time, and partially funded by Hollywood studios (shooting on location was far far more expensive than it was to shoot on sets in that time).

De Sica continued to make hit after hit after hit. In later years he had a professional relationship with Sophia Loren; Loren's role in De Sica film Two Women is a very rare example of an actor or actress winning an Oscar for a film not in English. His films won two more Foreign Language Film awards after the award became competitive, raising his Oscar total to four. De Sica kept acting and directing right up until his death in 1974 following an operation.

De Sica was a notable and respected actor, and remained in demand after becoming a director of note. He appeared in films by Max Ophuls and Roberto Rossellini (Il generale della rovere).

Random trivia: his second wife was the sister of Ramon Mercader, the guy who murdered Leon Trotsky. Small world.

De Sica as actor only: