Film / Beyond the Valley of the Dolls 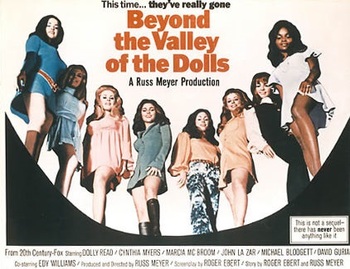 "There's juice freaks, and pill freaks, and then everybody's a freak! What you need is grass or a downer or something."
— Casey
Advertisement:

A kinda sequel to Valley of the Dolls released by 20th Century Fox in 1970. Originally intended as a straight sequel to Valley of the Dolls, the film's commerical success, but critical salvaging, resulted in Beyond the Valley of the Dolls instead being reworked as a satire piece and parody of the original. Directed by Russ Meyer and co-written by Meyer and movie critic Roger Ebert (who described landing the gig as an example of inmates Running the Asylum at the studio) about a musical quartet of girls who go to Hollywood to live with the lead singer's wealthy swinger aunt.

Pam Grier makes her film debut as an extra.

"Beyond The Valley of the Tropes":