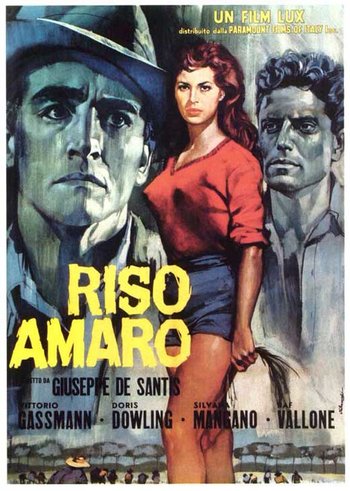 The setting is northern Italy during rice-planting season. Seasonal workers, all women, head north to the rice fields for planting and harvesting. Hiding among those workers are two petty thieves, Giuseppe and his moll/partner Francesca. They have graduated from petty thieves to big-time thieves after Francesca, at her controlling, abusive boyfriend's urging, stole a very valuable necklace from the hotel where she worked as a maid.

Giuseppe and Francesca are at the train station when the cops show up. Before he can be arrested, he shoves the necklace into her hands and throws her on the train. So that's how Francesca finds herself on the train headed north to the rice fields. She isn't a very good or subtle thief, and another worker, Silvana (Silvana Mangano in her Star-Making Role) notices Francesca hiding the bundle under the blankets of her barracks-room mattress. Silvana filches the necklace and is torn between wearing it herself and turning Francesca in...but all is not as it seems. Eventually Giuseppe shows up at the rice farm with a new scheme: to steal the whole season's rice crop.