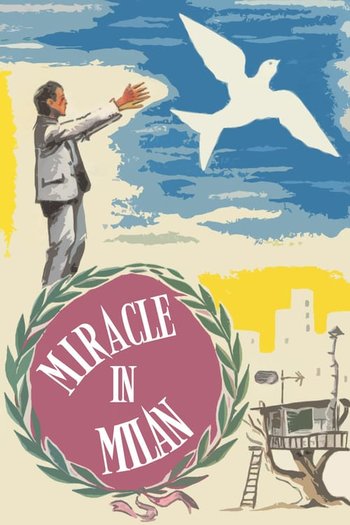 Miracle in Milan is a 1951 film from Italy directed by Vittorio De Sica.

An old lady named Lolotta finds an infant in her cabbage patch. She immediately adopts him and names him Toto. Unfortunately, when Toto is a boy of six or so, Lolotta dies. With no one else to look after him, Toto is sent to an orphanage.

The film covers nothing of his time in the orphanage, instead cutting directly to Toto's release as a young man. A cheerful, affable sort, and a natural leader—and possibly with magic powers—Toto makes his way to a homeless camp on the outskirts of Milan. Rather than go into the town and get a job, Toto settles into the homeless camp. With his charm and good nature, he winds up being their de facto leader. He transforms their miserable field of rabbit warrens into something approaching an actual neighborhood, with sheets of tin and stray lumber cobbled into houses. However, the discovery of oil under their little village threatens to disrupt the camp and destroy all of Toto's good work.