Film / The Man in the White Suit 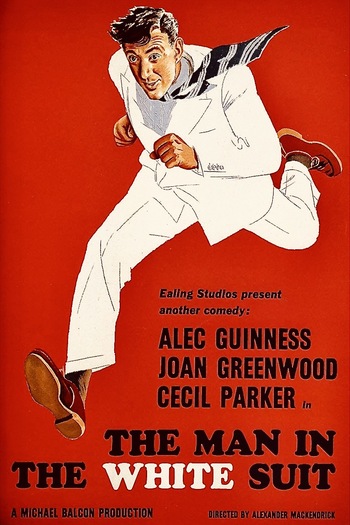 The Man in the White Suit is a 1951 Ealing Studios comedy film, directed by Alexander Mackendrick and starring Alec Guinness, Joan Greenwood, and Cecil Parker. Though not always seen as such, it is also a work of Science Fiction; it revolves around a scientific invention, with many of its consequences logically assessed.

Guinness is Sidney Stratton, an industrial chemist who believes he is on the path to creating a new synthetic fibre that never wears out and cannot be damaged, dirtied or stained. When at last he succeeds, he finds himself on the run (wearing a demonstration suit made from the new fabric), pursued by the vested interests who want Sidney's invention suppressed due to the effect it will have on the existing industry.