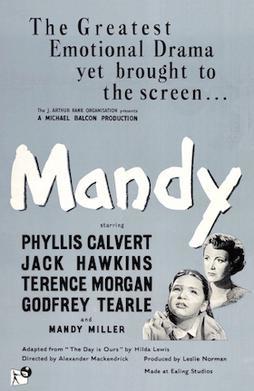 Mandy, later sold to television as Crash of Silence, is a 1952 British drama film, directed by Alexander Mackendrick, written by Nigel Balchin and Jack Whittingham, and produced by Michael Balcon and Leslie Norman, and based on the novel The Day is Ours by Hilda Lewis.
Advertisement:

Mandy Garland (Mandy Miller) is born without auditory nerves. Her parents, Harry (Terence Morgan) and Christine, aka Kit (Phillis Calvert), and her grandparents (Godfrey Tearle and Marjorie Fielding) keep her sheltered from the world, and by age six she's desperately lonely and doesn't know any language, despite efforts to teach her fingerspelling. Kit enrolls her in the Bishop David School for the Deaf, which focuses on teaching kids to speak. Headmaster Dick Searle (Jack Hawkins), new teacher Miss Crocker (Patricia Plunkett), and deaf founder Jane Ellis (Nancy Price) work to teach Mandy, but Harry disapproves of Kit's decision to place her in the school and fights to get her taken back out. Obstructive Bureaucrat Ackland (Edward Chapman) takes advantage of the minor scandal to try to steal Searle's job.