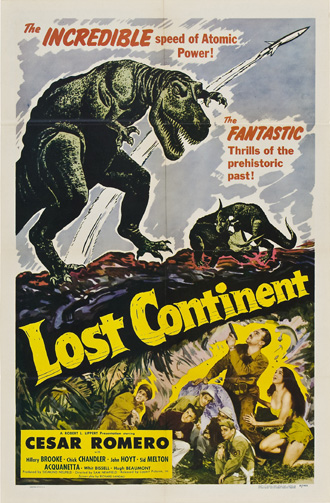 "Lost Continent? I lost my keys once, but this is ridiculous!"
Advertisement:

(The) Lost Continent is a 1951 B-Movie produced by Robert Lippert, starring Cesar Romero and Hugh Beaumont. Starting out as a fairly straight-forward, Cold War era military film, it quickly switches into a "lost in the jungle" romp, then segues into an interminable "rock climbing" sequence before ultimately transmogrifying into a dinosaur film.

Scientists and military men are testing the guidance systems of an experimental atomic rocket; said guidance systems fail and the rocket vanishes somewhere in the South Pacific. An expedition, led by one Major Joe Nolan and including the project's three key scientists, is dispatched to retrieve it before the Russians can get their hands on it.

Whilst scouting for an island or such that the rocket could have crashed on, their plane's engines abruptly fail, dumping them onto a familiar-looking tropical island. The island natives speak of "smoke and flame, burning from sky", clearly referring to the rocket which crashed on the top of the island's plateau, causing no small amount of geological turmoil (hold that thought). The expedition slowly — and we mean slowly — makes its way to the top of the mountain, and drags the hapless audience along for the ride.

Once at the top, they find... an exact duplicate of the jungle set at the mountain base. Except, as one scientist points out, this jungle is flowered by long-extinct plant life. And not just plants; we soon encounter much prehistoric animal life as well. The cast wastes spends much time running from dinosaurs and wandering through the foliage before finally stumbling upon the missing rocket. Examining its guidance computer will help the scientists correct the problem, and so exit stage down. (That's right: that means more rock climbing!)

Um, better get a move on, quick: the entire island is beginning to break up! And so the survivors pile into a tiny rowboat and watch from the ocean as the island explodes like an atom bomb. Fin.

Robert Lippert was also an uncredited producer for the classic The Fly (1958).