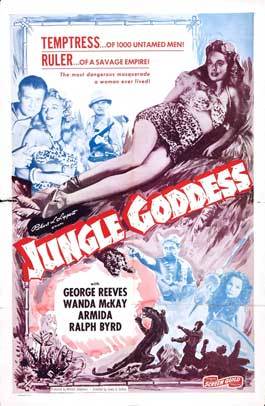 Down-on-their-luck pilots Mike and Bob are hired to track down Greta Vanderhorn, a millionnaire's heiress daughter, whose plane went down in the central African jungle some years prior. Upon arriving in the jungle, the two are immediately captured by natives (with gun-crazy Bob killing one in the process) and brought before their leader Mata Greta... the very heiress they were sent to find.

Turns out the natives, upon finding Greta in the jungle after her plane crash, instantly began to worship her as a goddess, apparently just because of the color of her skin. She insists that Bob and Mike would have been treated similarly had Bob not murdered; but, while Bob the "white devil" awaits execution at the hands of the natives, Mike and Greta work up a plan to get the three of them back to civilization. But between the usual dangers in the jungle and the natives' ever-decreasing opinion of "Mata" Greta, escape won't be so easy...

Not to be confused with the 1956 movie Liane, Jungle Goddess.