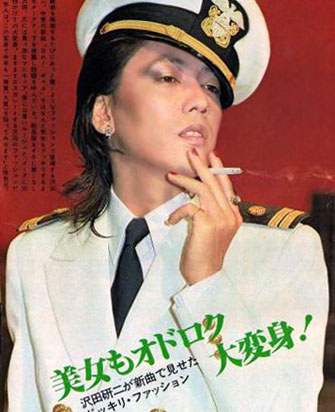 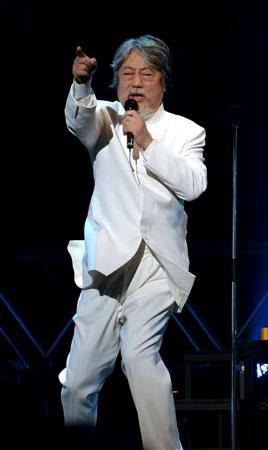 Kenji Sawada as of 2013 at the first Tigers Reunion Concert, performing "Love Only For You" with the audience swooning like teenagers no doubt.
Advertisement:

Kenji "Julie" Sawada (born June 25, 1948) is a Japanese musician, actor and composer, best known to Americans for being in Mishima A Life In Four Chapters. His claim to fame among Japanese is perhaps, according to many, such as SMAP, with planting the seeds of the Visual Kei movement. His manner of dress when he performed, his heavy use of makeup, and his tendency to not seperate his stage personality from his real one are all traits later adopted by most Visual Kei groups. After the breakup of The Tigers, Sawada formed the Super Group PYG, bringing together many of his former rivals as musicians and churning out three albums. He later began a very successful solo career and became apt to a Japanese David Bowie, acting in many roles to this day.

Probably not related to the bassist of X and Loudness.