You No Take Candle 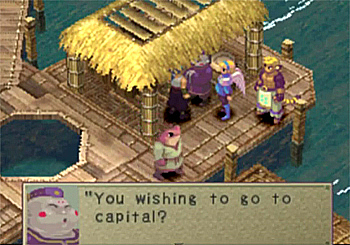 "Yes, but please first learning how to better English."
"Friends wondering why Nopon talk so strange? Well, we take high ecclesiastical form of Late Modern Noponese and map grammatical patterns onto Hom Hom language. This give us adorable yet expressive Nopon speech... Actually, me just made that up. Though you must admit, it pretty impressive theory."
— Nopon Villager, Xenoblade Chronicles
Advertisement:

When a character or group needs to be portrayed as foreign, primitive, or inferior in intellect, or perhaps just childlike, yet still intelligible and able to communicate, the language of these characters is spoken as a grammatically abhorrent mess. Characters could be speaking a mutilated version of the language they learned from another culture, or a butchered version of their own language, or simply a language so "primitive" it appears from an outside perspective to lack complexity. This trope is Older Than Print, going all the way back to Chaucer.

If the work is taking on a superior versus inferior viewpoint, the superior beings might use Spock Speak or Ye Olde Butcherede Englishe to contrast the barbarism of the other group. The inferior race is often shown speaking pidgin English and omitting articles, auxiliary verbs, possessive pronouns, and sometimes prepositions. The speakers often refer to themselves in third person. It is quite similar to Hulk Speak, though even non-combatants can or will use it. In some cases, it is a form of Aliens Speaking English, in which the creatures have their own language and speak English as a very poorly learned secondary language.

This trope comes from two sources. First, English as a language has very little inflection, meaning words don't change their forms to cover case, tense, grammatical gender, etc. very much if at all. Instead, English requires a lot of small auxiliary words to convey the same information which other languages do in much fewer but more complex words. At the same time, you don't need these auxiliary words to make a comprehensible sentence (hence the adage, "English is an easy language to speak badly.") This leads to the second source: pidgin languages,

which are highly simplified languages used by groups without a common language to communicate. Pidgins are stripped down to the absolute bare minimum of grammar needed to get one's point across, to make them easier to learn; some common English idioms like "long time no see", "sorry, no go" or "no X, no Y" are presumed to have their origin in the Chinese-English pidgin that emerged when the United Kingdom started commercial relationships with China.note Due to modern Mandarin's pretty minimal grammar, some like "long time no see" (or "好久不见") are word-for-word translations of legitimate Chinese phrases anyway.

There's actually a scientific term for this kind of speech pattern: agrammatic speech

The Trope Namer is World of Warcraft, where kobolds, who wear candles on their heads to light their way in the mines, say this when attacked by a player character.

Supertrope to the more racial Asian Speekee Engrish and Tonto Talk, and like them sometimes Truth in Television, although also like them it can sometimes also be considered offensive or politically incorrect if used poorly. Compare Hulk Speak and Strange-Syntax Speaker. If the character can speak proper language, but nevertheless chooses to speak like this for some reason, it's Elective Broken Language. If the speaker is otherwise very capable in their own language, then it is Eloquent in My Native Tongue. A softer version of this trope is Poirot Speak where characters who speak a language quite fluently will occasionally insert syntax errors or bad grammar to remind the viewer that they are indeed foreigners. Unrelated to You Can't Get Ye Flask, except in sense that we suck compared to computer overlords.