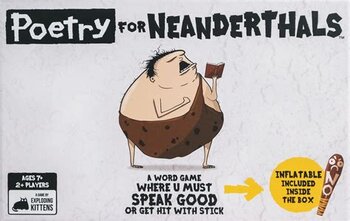 is a word game by Matthew Inman, Shane Small, and Elan Lee.
Advertisement:

It's similar to Taboo

in that players are divided into teams and take turns describing drawing cards with words written on them and describing those words to their teammates. However, you can only use words consisting of one syllable when describing a word. For example, one way to describe "Tyrannosaurus Rex" would be "Big thing like bird with small arms. It scare me." The You No Take Candle part isn't required, but it tends to happen naturally while playing.

If a player uses a word with more than one syllable to describe a word, they get hit with the "NO!" Stick, which is a 2-foot inflatable club with "NO" written on it (pictured, bottom right.) If that happens, your team loses a point. If someone on your team successfully guesses the word, your team gains the amount of points assigned to the word on the card. The team with the most points at the end of the game wins.

Poetry for Neanderthals contains examples of: