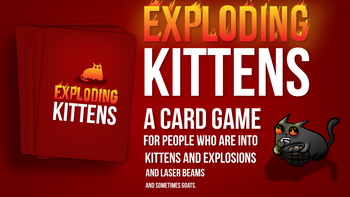 is a card game created by Matthew Inman (from The Oatmeal), Elan Lee, and Shane Small. Originating as a Kickstarter project and exceeding its goal in eight minutes, it went on to become the most backed project in Kickstarter history.
Advertisement:

When beginning the game, players start with at an identical number of cards, including one Defuse card for each. All Exploding Kittens and remaining cards are then shuffled into a face-down deck. Players then take turns drawing cards from the deck until somebody draws an Exploding Kitten. Should this happen, they "explode" and lose the game (unless they can use a Defuse card). This continues until only one player remains, and is declared the winner.

There are numerous different cards that lessen players' chances of exploding. On a player's turn, they can play as many of the cards they have in their hand as they want (or none at all!), and they then draw a card from the draw pile to end their turn. There are a variety of cards in the core deck, as well as multiple expansion packs and additional full decks.