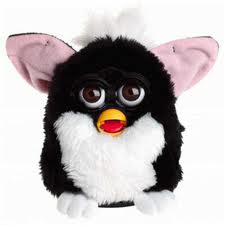 Me love you!note Me ALWAYS love you...
Advertisement:

Furby is a robotic pet toy that was released by Hasbro and TIGER Electronics in the holiday season of 1998. It was widely popular for its time and sold millions of units.

In 1999, they released the Furby Babies, which were smaller, but also had a higher pitched voice and more baby-like tendencies. In 2001, Shelby, a clam-like Furby with a more interactive personality, was introduced.

They were unique robots in which they would start out knowing only their own language, Furbish. As time went on they would start using more English. They would also talk to each other if placed near the infrared sensors on their head.

Furby was revamped in 2005 as the Emoto-Tronic Furby. They were much bigger than the original ones. It looked more organic and implemented more interactivity, such as playing games and telling jokes. It and both its variations, Babies and Funky Furby, were ultimately discontinued in 2007. Another revamp was made in Fall 2012.

This was shortly followed by an even more-interactive model called "Furby Boom," which could lay eggs and hatch "Furblings" via an iOS/Android app. A bigger model came out in 2016, "Furby Connect," which offered even more interactivity with iOS/Android devices.

There was a PC game dedicated to them in 1999 known as Big Fun in Furbyland.

The Furby was intended to be a follow-up to Tiger's previous digital pet toy, Giga Pets.

The toy provides examples of: