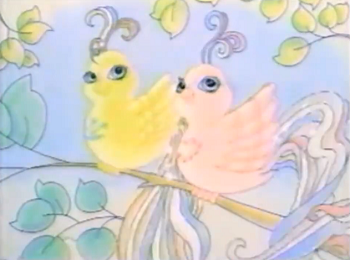 Pony Pigeons!
Fairy Tails is a short-lived toyline of technicolor birds with combable hair made by Hasbro. The line is a Spin-Off of My Little Pony (Generation 1) and its genesis coincided with the introduction of Pony Friends, non-pony toys, to the My Little Pony lineup in 1986. The one thing that makes the Fairy Tails distinct from the Ponies and the Pony Friends is articulation. The Fairy Tails all have clawed feet that can open and close, allowing them to perch on their perch, perch on your finger, or, if open, just stand around.
Advertisement:

Although the toyline kicked off hopeful with twelve toys, fictional support was limited to a few comics that were published in the My Little Pony and Friends series, which was used to promote several of the smaller toylines for girls Hasbro had out at that time. However, no crossovers ever occurred. Further characterization comes from the back-of-the-box descriptions. There were also four partially animated commercials that helped the world-building along.

Not to be confused with a similarly named manga.