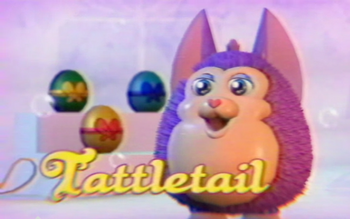 Warning: Contains sharp objects, choking hazards, and a demonic mother figure that will literally try to murder you. Batteries not included.
Advertisement:

Furby was a smash hit upon its release in The '90s. The toys had animatronic technology that was impressive for the time, making them interactive and seemingly alive. They were also reasonably priced.

Despite their initial positive reception, Furbies also gained a more negative response later on. Many people find Furbies creepy, as they seem almost too alive. There are several memes and stories online making them out to be monsters or serial killers.

Love them or hate them, Furbies have quite a reputation. And because of that reputation, they are often parodied in works of fiction. Expect to see in-universe Bland-Name Product toys inspired by Furbies. They will often have a fluffy and cuddly appearance and the ability to speak. Because of the common fear of Furbies, these fictional toys may be portrayed as evil monsters, like a cross between Killer Teddy Bear and Hostile Animatronics. Otherwise, they may be portrayed as annoying things that never shut up, or even, possibly, as genuinely sweet and lovable toys.

The trope name is a pun on faux fur. If you're looking for a trope about that, see It's Fake Fur, It's Fine. Not to be confused with a fake member of the Furry Fandom.