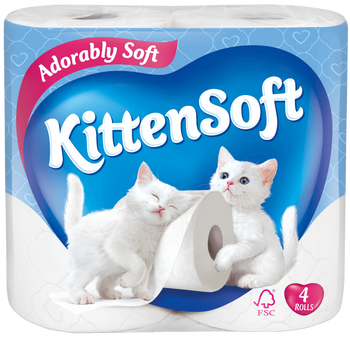 Note: We do not recommend using kittens as toilet paper. It's very scratchy.
"Side note: Kittens make everything better."
— Sauza Tequila

...admit it, how long did you spend looking at the example picture before you started reading this article? Looking at the picture with automatic Bambi eyes setting in, with brain geared to "Such wee small biddy kitties? Whosa cute kitty? Sleepy kitty."

Kittens seem to provoke an automatic pleasure/protective/affection reaction in many (if not most) people. For this reason, they are often used by creators to arouse those feelings toward a character as well. Want to show that someone is a softy despite their crusty exterior? Have them rescue a kitten! Want to indicate that they're evil instead? Torturing or killing a kitten will do it. Want to lighten a mood that's gone Darker and Edgier? Add a kitten or two.

Cat Girl can be a Sister Trope if you're creative enough. See also The Internet Is for Cats.

Compare Cool Cat, Fun Size, Mega Neko, Precious Puppy, Big Friendly Dog, Kindhearted Cat Lover, Cuteness Proximity, Bunnies for Cuteness, Panthera Awesome and Great White Feline. Contrast with Cats Are Mean, Hair-Raising Hare and Mister Muffykins. (Except when Cute Is Evil, in which case they go hand-in-hand.) In most cases, though, kittens are portrayed as more friendly and likable than adult cats, hence the contrasting tropes of Right-Hand Cat and If You're So Evil, Eat This Kitten!. In fact, when a dog is chasing an adult cat, the dog is usually portrayed as the hero but when a dog is chasing a kitten, the dog is often the villain.

This song, whose real title is "Warm Kitty

◊," was written by schoolteacher Edith Newlin in 1937. It was published by Willis, a company that produced song books for children. It also appears in the 1940s edition of Childcraft. The producers of Big Bang Theory had permission from Willis to use the song, but not from Newlin's heirs

, who filed a lawsuit.

To see if she has a handle on her emotional shapeshifting, Mei's parents see if she can remain calm with a bunch of adorable kittens clambering all over her.

To see if she has a handle on her emotional shapeshifting, Mei's parents see if she can remain calm with a bunch of adorable kittens clambering all over her.