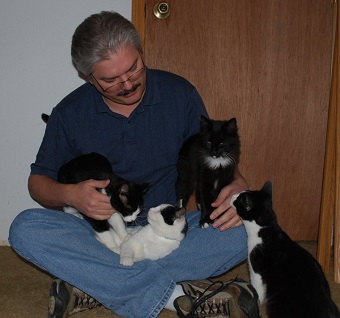 The Critter Room is an online livestream broadcast out of the Seattle area by semi-retired Air Force veteran John Bartlett (known to viewers as Foster Dad John). Through a local shelter known as Purrfect Pals, he takes in cats (usually expectant mothers that are about to have their litter) and cares for them, raising the kittens on webcam until they're old enough to be fixed and vaccinated (after which they're adopted out to "forever homes").

The stream shows a 24-hour, candid look at the mother cat raising her litter, and the adorable antics of the kittens thereof. If you want a quick and easy way to amuse yourself or blow off steam, look no further than this. The stream could originally be found here

. In December of 2016, Foster Dad John was informed that Livestream would begin charging him for services due to having too many viewers, so the stream was moved to YouTube

. (Keep in mind, however that there may not be a new family on cam at any given time.)

. A similar webcast from across the border in Canada is at TinyKittens.com

, run by members of the Langley Animal Protection Society.

Tropes associated with The Critter Room include

"Enjoy the kittens! Have a nice day."