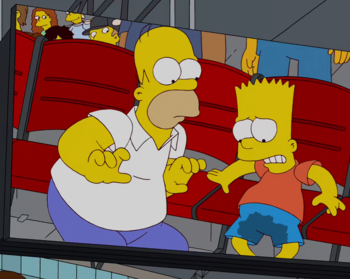 When a Potty Emergency goes past critical, you get Potty Failure.

Essentially, Potty Failure is when a character wets him/herself, soils him/herself or both and the act is Played for Laughs. This is a common type of Toilet Humour.

May also happen if people hear a joke so funny that they have to pee themselves, or to anyone who's the victim of a Laxative Prank. Sometimes happens in a Toilet Training Plot.

Compare and contrast Excrement Statement. Compare Bring My Brown Pants, when this happens to a character whose loss of control is fright-induced. Also Compare Urine Trouble and Tinkle in the Eye, for non-house-broken pets and children. Also compare Embarrassing Damp Sheets, for when a character urinates or whatever else in their bed, and Warm Water Whiz for when a character urinates their bed because someone put their hand in warm water. Finally, see No Dead Body Poops for loss of control, or lack thereof, upon death.

Please do not add any video and real life examples to this trope.